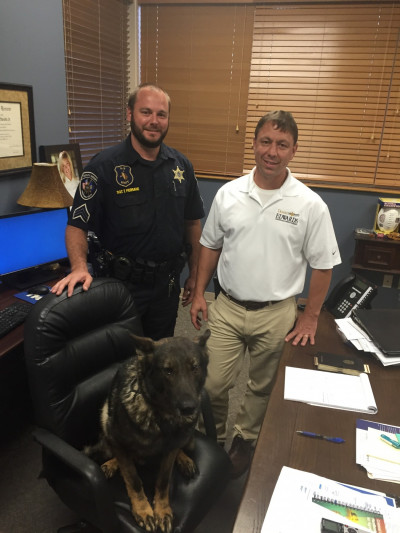 Lt. Tommy Ferrand, a graduate of Southeastern Louisiana University, began his career with the Tangipahoa Parish Sheriff’s Office in 1998. During his tenure, he has served the sheriff’s office and our community in many capacities. First as a criminal patrol deputy, then serving four years on the Narcotics Task Force as an undercover narcotic agent. For the past 10 years, he has served as a K9 Officer, and is the Team Leader for our K9 Unit and Special Response Team. Ferrand has also recently been promoted to the rank of Lieutenant.

In February of 2015, Ferrand and his K9 partner Mako played a key role in removing seven (7) kilos of cocaine and $48,000 of drug money from our interstate, with just one traffic stop. In May of 2015, Ferrand and Mako were responsible for initiating another traffic stop the led to the discovery and seizure of over $854,000 in drug money. In addition, Lt. Ferrand and K9 Mako won the 2015 first and second quarter “Award of Excellence” from the United States Police Canine Association for their bravery and courage while in the line of duty.

“Lt. Ferrand establishes a standard in his performance worthy of anyone to try to emulate. He is a strong leader and possesses a pleasant and friendly disposition with all who he encounters.” states Edwards. “His service is deeply appreciated and his job performance is certainly worthy of this recognition.”