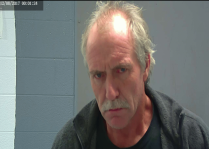 - Davin Lane Bates- 49- years - old from Pine Grove, LA. was arrested on December 7, 2017, by Sheriff’s Office Detective’s. Bates was identified as the individual responsible for the theft of
a utility trailer taken from a residence on Hayden Ln in Roseland. Detectives caught up with Bates at the Wilmer Quick Stop where he was taken into custody.

Incidental to Bates’ arrest, Detective’s found on his possession a large amount of methamphetamine (22.8 gram), digital scales, and several small baggies for packaging the narcotics. In addition to felony theft charges, Bates was charged with possession with intent to distribute a schedule II control dangerous substance, possession of a schedule IV control dangerous substance, possession of drug paraphernalia, failure to appear for non-support, and a parole violation hold.