Pot Gone Postal - $27,000 worth of marijuana mailed to a Hammond Residence. 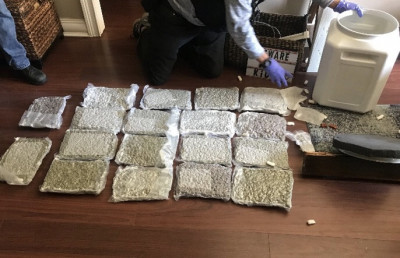 Two Hammond residents were arrested this week after someone mailed them 19 pounds – or approximately $27,000.00 worth of high grade marijuana. The residence has been the center of an ongoing joint investigation in regards to the Distribution of Illegal Controlled Dangerous Substances that was being delivered via United States Postal Service.

On April 5, 2018, authorities conducted a controlled delivery of the package. A white female who was later identified as 24-year-old Morgan Miguez, retrieved the package from the front door and brought it inside the residence. Agents then executed the search warrant on the residence. The search revealed that the package contained 19 vacuum-sealed bags containing approximately 19 pounds of high grade marijuana. This amount clearly indicates the intent for street-level distribution. Agents also found quantities of Methamphetamine in the home, various items of drug paraphernalia and $1,000.00 of US Cash Currency.

Moral of the story - No package is worth your freedom; think twice before you lick the envelope.