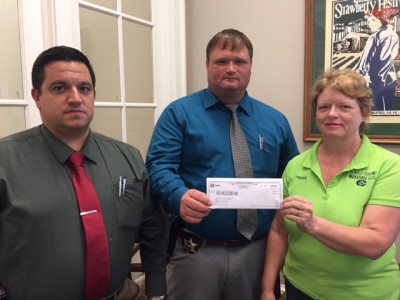 On July 20, 2018, the Tangipahoa Parish Sheriffs Office Uniformed Patrol Division conducted an initial investigation into a compliant filed by family members of an elderly person in the community regarding fraud. The complainant was contacted by an authority with the victim's bank, inquiring about suspicious withdrawal's allegedly made by the elderly victim.
The Tangipahoa Parish Sheriffs Office Financial Crimes Unit lead by Detectives Travis Pitman and Michael D'Amato began looking into the complaint and discovered that a cashiers check from the victim's bank account in the amount of $25,000.00 was deposited into an account in Union, New Jersey. At this time, TPSO's detectives obtained a search warrant and an asset seizure warrant. In doing so, they were able to recover $21,8846.22 of the victims money before the alleged rotten scoundrels were able to liquidate the funds into cash.
TPSO detectives were also able to identify 71-year-old New Jersey resident Luis Alicea as the person who deposited the funds into the account. The Township of Union Police Department located in Union New Jersey and the Union County Prosecutors Office have been notified and were given all of the information obtained for their continued investigation into this matter. The fraud scheme used in this investigation is known as a Jamaican Lottery Scam. It targets elderly members of the community who have access to large sums of liquid assets.
On August 7, 2018, our hero detectives met with the victim's family and turned over the recovered stolen funds in the amount of $21,846.22.
The Tangipahoa Parish Sheriffs Office Financial Crimes Unit would like to implore how important it is to timely report financial based crimes, especially those crimes where a bank wire and/or mail services are involved. Nowadays, detectives have the tools and resources to recover all or most of the funds lost in these cases before they become available to those committing the crime. The Tangipahoa Parish Sheriffs Office would like to send a special thanks to those Banking Personnel at Whitney / Hancock Bank who assisted in the investigation.
###