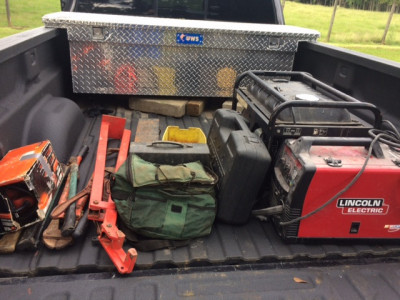 Thanks to a Crime Stopper tip, two burglary suspects have been arrested and subsequently face additional charges.

In August 2018, TPSO Detective’s began investigating a string of burglaries and thefts in the Amite and Loranger area. During the course of the investigation, Detective’s identified 44-year-old Daniel Chappetta of Picayune and 28-year-old Ashley Castle of Loranger as the possible suspects. It was soon learned that both subjects had active warrants from Washington Parish and were wanted for questioning on several other cases.

On September 26, 2018, Detectives learned that Ashley and Daniel were spotted on Million Dollar Road in the Covington area. With the assistance of St.Tammany Parish Sheriff’s Office the two were located as they were parked in the driveway, trespassing at a residence on Million Dollar Rd. The two were arrested and taken in to custody. A search warrant was obtained and executed on their vehicle. As a result, Detectives were able to recover most of the items stolen from the Tangipahoa Parish burglaries.

Thank you to all the brave citizens of our parish who report tips and who are relentless in our efforts of combating crimes in our parish.