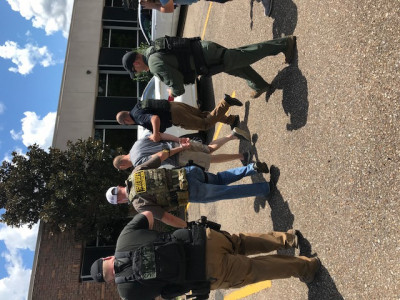 UPDATE - At approximately 7:45 am this morning, a domestic incident occurred between 39-year-old Chad Milton of Ponchatoula and his wife, an employee of Martha Vinyard Elementary School. The suspect, while having an active protective order against him, arrived on campus to speak with his wife who is listed as the protected person in the order. When she refused to communicate with him, the suspect ran his truck into her parked car on the school parking lot, then fled the location.

After the suspect left the school, he began sending alarming text messages to the victim, one of which displayed a photo of an assault rifle. School officials immediately contacted the Sheriff's Office regarding the incident. Taking an active approach, Sheriff Edwards deployed all available resources to the scene and requested assistance from the Louisiana State Police, Louisiana State Police DPS, Louisiana Depeartment of Wildlife and Fisheries and US Customs. The elementary school as well as nearby Ponchatoula High School was quickly surrounded by law enforcement and all available access areas to the school were blocked by law enforcement.

An immediate search for Milton began. During he investigation, TPSO detectives reached out to Milton's family who advised that Milton returned to his property this morning and acquired weapons. Authorities asked the family, if contact could be made with Milton, to provide Milton with the name and telephone number of a TPSO detective, and to request that he turn himself in. A short time before Milton was apprehended, he contacted the detective. He stated he did not want to run anymore, and advised of his location. Detectives responded to Milton's residence and placed him in custody without incident.

Milton had two vehicles. Both were located, secured, and taken as evidence. Search warrants will be obtained on both vehicles.
With the severity of this situation, the area around the elementary school remained on high alert for precautionary measures.
Milton will be charged with violation of a protective order, terrorizing, and hit and run.
Sheriff Edwards commends the actions of the school principal Melissa Ryan, Tangipahoa School Superintendent Melissa Stilley and her staff. They did an outstanding job in their efforts to keep the children of Martha Vinyard safe during this incident.

UPDATE- Suspect has been taken into custody without incident. Details surrounding his arrest will be released at a later time.
Thank you for all of your support!

Original Release - PONCHATOULA, LA - August 30, 2018 - The Tangipahoa Parish Sheriff's Office is currently on scene at Martha Vineyard Elementary School in Ponchatoula where a threat was made against an employee. The domestic related incident began this morning outside of the Elementary School.
After leaving the scene, the suspect 39-year-old Chad Milton of Ponchatoula, sent the victim threatening text messages. At this time, deputies are not allowing access to or from the school and have Dunson Rd. closed and secured for precautionary measures.
Anyone knowing the whereabouts of Chad Milton is asked to contact the Tangipahoa Parish Sheriff's Office at 985-345-6150.
###


Sent from my iPhone