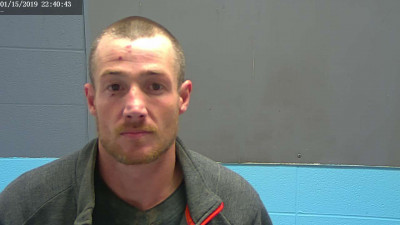 On January 15, 2019, Tangipahoa Parish Sheriff's Office Detective Nathaniel Cooper along with multiple uniformed patrol deputies assisted Canadian National Agent Josh Fletcher in the area of Crapanzano Road at Highway 190, Hammond, Louisiana, relative to a subject trespassing on the railroad track armed with a weapon.
Upon arrival, Detective Cooper was advised that a white male wearing a red and black jacket armed with what appeared to be a shotgun or rifle walking along the railroad tracks carrying a green bag. He was further advised that upon the subject sighting, he fled on foot into a wooded area.
Detective Cooper and TPSO Deputy James McGovern began assisting in the search for the subject. After a short period, the subject began to flee on foot through the wooded area in a western direction along side of the railroad tracks, at which time Detective Cooper and Deputy McGovern gave chase crossing Rogers Road proceeding north into another wooded area. A secure perimeter was established by several responding deputies as the foot chase continued. After several minutes of searching, the subject was apprehended and taken into custody.
The subject identified himself as 34- year- old Anthony Holliday of Ponchatoula, LA. It was subsequently revealed that Holliday had multiple outstanding arrest warrants from the United States Marshals Office, Hammond Police Department, and three felony warrants of Tangipahoa Parish Sheriff's Office.
Detective Cooper and Agent Fletcher conducted a search of the area where the subject was first observed, at which time a green bag containing four shotguns and a fishing pole was located. Detective Cooper later noted a fishing hook to be stuck in the left pant leg with a red fishing line matching the fishing line on the fishing pole located on scene.
Holliday was booked on charges of Flight from Officers, Criminal Trespassing, Convicted Felon of Firearms, Outstanding arrest warrants relative to Failure to Register as a Sex Offender and Possession of Stolen Property. The subject is also to be held for traffic warrants of Hammond Police Department and the United States Marshal's Office relative to a Failure to Appear Warrants.