Deputy of the Year 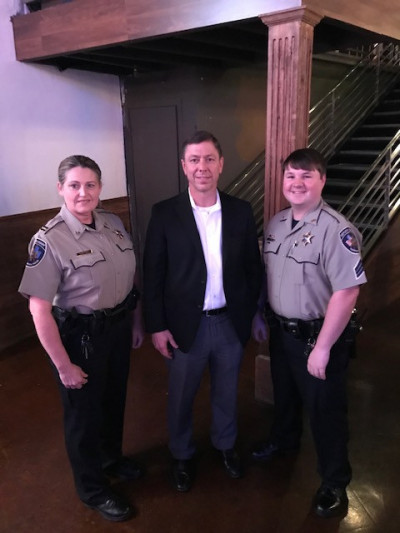 Sheriff Edwards recognized Sgt. Dunn for his dedication and ability to promote “Honor, Integrity and Excellence," which are core values of the Sheriff's Office.? "He is outstanding in his field and has excelled at every task given to him since day one," says Edwards. "Sgt. Ethan Dunn is a man who proudly serves his community not only as a sheriff’s deputy, but also as firefighter." he stated.

Sgt. Dunn began his career in public service at the age of 16 when he became a junior firefighter with the Husser Volunteer Fire Department. Dunn became a Captain at the age of 20, and still currently serves in that position today. Sgt. Dunn joined the sheriff’s office in 2010, when he accepted a position in Communications. He quickly became a trainer and a supervisor before being transferred to uniform patrol in 2013.

In 2016, Dunn was temporarily assigned the Professional Standards Division where he became involved in the department’s new hire and in-service training program, the Accreditation process, as he also served as the TPSO’s Reserve Academy’s Assistant Director under the direction of Captain Jim Richardson.

In 2017, Dunn was promoted to the rank of Sgt.where he continues to serve the TPSO and our community.

Thank you for your outstanding service and a for a job well done!