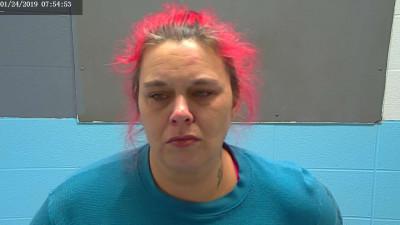 The reported incident occurred in the early hours of January 24, 2019, where deputies with the Tangipahoa Parish Sheriffs Office responded to a residence on Alford Lane, in Tickfaw, in reference to a report of a home invasion/armed robbery. The caller stated that an unknown black male wearing a mask entered the residence with an assault rifle and robbed the residents at gunpoint of an estimated $2,000 in cash.

Upon arrival, detectives immediately began an investigation and search of the crime scene area. During this time, detectives developed two possible suspects, who were identified as 21 - year - old Jamyrah McCray of Illinois Jones Rd and her boyfriend 19- year -old Dorian Datron Evans. McCray and Evans were both located at McCray's residence when detectives dropped by to speak with her about the events that took place at the scene of the crime. During initial contact, McCray confessed to her involvement in planning the staged home invasion, participating in the transportation of co-conspirators, and for facilitating the robbery.

It was discovered in the investigation that the victim's 38-year-old roommate Tonya Lee, was implicated as to being in on the set-up and 18-year-old Jamonearell Bagent, of Hammond.

As the case developed detectives learned the victim received a large settlement check the day prior to the staged home invasion. Having this knowledge the victim’s roommate, Tonya Lee along with friends Evans, Bagent and McCray hatched a plan to rob the victim of her money.

Subsequent to the findings of this investigation, Evans and Lee were placed under arrest in the early hours of January 24, 2019, and later booked at the Tangipahoa Parish Jail on charges related to armed robbery and cruelty to juveniles.

During the commission of the crime McCray, Evans and Bagent were accompanied by McCray's 5 –year-old child while the crime was carried out. TPSO Detective Travis Pitman obtained arrest warrants for McCray and Bagent for L.R.S.14:64 Relative to Armed Robbery and 14:93 Relative to Cruelty to Juveniles.

On January 30, 2019, McCray was located and taken into custody without incident, however 18 -year-old Jamonearell Bagent of Hammond, LA. is still at large.

Anyone having information relative to this case is asked to contact Crime Stoppers at 800.554.5245.