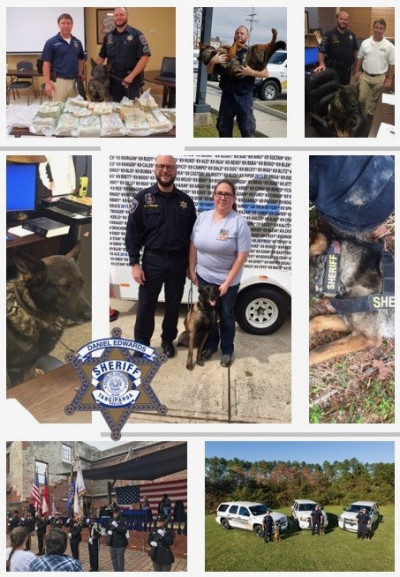 Their lives were celebrated through prayer, song, color guard, awards, dedicated speeches and personalized art. Each K-9 handler was the recipient of their partner’s honor. “Our dogs deserve just as much respect and honor that we do. This event has meant so much to my family and I,” says Lt. Tommy Ferrand. “Police dogs are indispensable to law enforcement,” says Edwards. “They perform specialized tasks, go into places where humans can’t go or where it’s too dangerous for them to go. They are partners, they become family to many and friends to all,” he continued. Their unique gifts enhance the work carried out by law enforcement and their loss is felt just as deeply as would be any other member of the sheriff's department.

Mako was a German Shepherd born in Czech Republic. He began his career with the Tangipahoa Parish Sheriff’s Office in 2011. After six years of service, Mako retired and spent the rest of his days with Lt. Ferrand, his children, and Brandee. He passed away in July of 2018.

Mako had an exceptional career. He seized approximately over $950,000 U.S. dollars, 16 plus kilos of cocaine, 300 plus pounds or marijuana, and numerous amounts of heroin and methamphetamine during his time with the TPSO. He also conducted 321 searches and assisted in 36 apprehensions.

“I imagine when they leave us they are not sad, but are healthy and are patrolling the streets of gold.” said Holly Cripps, founder of "We Ride to Provide". Those words paid tribute to a total of 61 fallen police dogs at the 11th Annual We Ride to Provide K-9 Memorial last weekend.

The Tangipahoa Parish Sheriff’s Office sends a warm and heartfelt “thank you” to Holly and Jason (Cripps) for founding and hosting the event. The TPSO would also like to thank Ms. Kristen H. (pictured in the attach photo with Lt. Ferrand), for sponsoring Mako, and now for sponsoring TPSO K9 Delilah. Delilah is currently Lt. Ferrand’s K-9 partner.