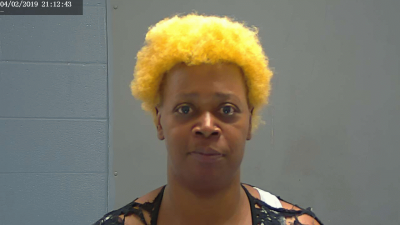 On March 26, 2019, the Tangipahoa Parish Sheriff's Office's Criminal Investigations Division began investigating the attempted use of a counterfeit $100.00 bill that was presented at the time of purchase for gas at a Kentwood gas station and convenient store.

Two females entered the establishment and attempted to purchase gas with a counterfeit one hundred dollar bill. Upon being questioned by the store clerk, one of the females grabbed the fraudulent bill from the attendant and both females fled the scene.

During the investigation, detectives learned that two females matching the descriptions of the alleged suspects carried out the same act in at least two retail establishments in Washington Parish. After further investigation, the two females were identified as 38 yea-old Kayla Johnson and 48 year-old Ladonna Coleman, both of Kentwood, LA.

With the assistance of the Kentwood Police Department, on April 1, Kayla Johnson was arrested. The next day, April 2, Ladonna Coleman was located and taken into custody at her residence. Both females have been booked into the Tangipahoa Parish Jail on charges of Monetary Instrument Abuse. Consequently, the investigation also revealed that Kayla Johnson was responsible for a residential burglary that recently occurred in the Kentwood area. Johnson was additionally charged with Burglary of an Inhabited Dwelling.