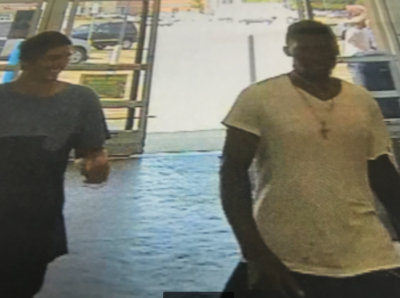 AMITE, LA - June 19, 2019 - Tangipahoa Parish Sheriff Daniel Edwards is asking for your assistance in locating and/or identifying the subjects in the attached photos.

Video surveillance cameras at the Walmart located in Amite, captured four subjects stealing three to four flat screen TV's from the store's electronics department. The incident occurred yesterday, June 18, 2019. Surveillance footage shows the subjects arriving to the location in a red 2007 Ford Mustang with a missing hubcap. It is also believed that the subjects in question were traveling with several other individuals in separate vehicles.

The individuals in the attached photos are wanted by the Tangipahoa Parish Sheriff's Office for questioning related to this incident. Anyone with information is asked to contact Crime Stoppers at 800.554.5245. TPSO Detective Earl McFarland is the lead investigator on this case.