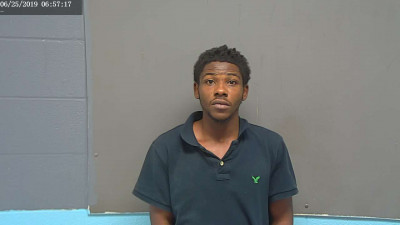 HAMMOND, LA - June 29, 2019 - The Tangipahoa Parish Sheriff Office began investigating a systematic series of vehicle burglaries in early June that occurred in the Cypress Reserve and the Landings Subdivisions. Over the course of the investigation, surveillance videos were collected along with a substantial amount of evidence - all pointing toward one lone suspect. The suspect appeared to be targeting unlocked vehicles, removing things such as money, earphones, phone accessories, firearms and firearm accessories.

June 24th, detectives received multiple reports of vehicle burglaries, where vehicles were unlocked and similar items taken from the Timber Ridge Subdivision.
As a result of the investigation, detectives were able to identify 21-year-old Jemoria STEWART Highway 445 in Robert as the target suspect.

On June 24, 2019, detectives located STEWART at his residence. Detectives located clothing, a mask, and several items that were reported stolen by victims.
STEWART was subsequently taken into custody and charged with seven counts of vehicle burglary. During questioning, STEWART confessed to these burglaries and to other burglaries dating back to October 2018, in the High Point Subdivision. STEWART was additionally charged with eight more counts of vehicle burglary.
Anyone living in the aforementioned subdivision and who may have been a victim of such a crime, to please report it. Call the Tangipahoa Parish Sheriff's Office Burglary Task Force Unit at 985-345-6150.