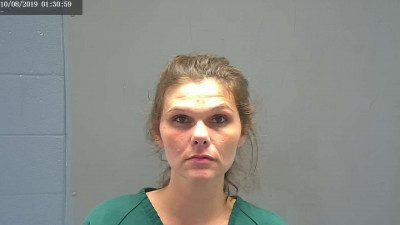 Investigators with the Tangipahoa Parish Sheriff's Office and Hammond Police Department established covert surveillance at several local business known to be targets of the shoplifting rings. Soon after surveillance was established, investigators observed one member of the shoplifting ring, 31- year -old Ashley PERRIN of Ponchatoula, LA, exit a vehicle and enter one of the business. As soon as PERRIN entered the business, the vehicle sped off. PERRIN was immediately recognized due to numerous prior arrests for shoplifting from local retail outlets in the Hammond area.

About thirty minutes later, the same vehicle was observed re-entering the parking lot as PERRIN was observed exiting the business empty handed and entered the vehicle. Investigators began mobile surveillance of the crew as they traveled toward the Ponchatoula area. During this time Investigators learned PERRIN had an outstanding warrants for a simple battery, a failure to appear for court warrant , and a active warrant by Louisiana Department of Correction office of Probation & Parole. At this time Investigators decided that they would execute the arrest warrants as soon as the vehicle came to a stop at its next destination.

The suspect vehicle soon turned into the parking lot of a Ponchatoula business and PERRIN was immediately taken into custody. The driver, 22-year-old Gabriella OLIN of Madisonville, LA, and a sixteen your passenger were also detained. OLIN was found to be in possession of used syringe as well a numerous prescription narcotics that were not in a prescription medication bottle. The sixteen your old female was found to in possession of a methamphetamine in a glass pipe as well as a prescription medication not in labeled prescription bottle. A search of the vehicle revealed several more new and used syringes, several pieces of clothing with the tags still on them, and numerous pieces of merchandise from the retail outlet PERRIN was seen entering and exiting. PERRIN also admitted to shoplifting the items from the stores.

The Organized Retail Theft Task Force will continue to proactively work cases such as these to assist local business throughout the Parish. For those who continue prey upon our local business, we know who you are and we will arrest you!