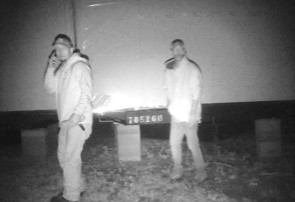 The Hammond Police Department is currently working a similar case possibly involving these same suspects. If anyone is able to identity the subjects in the attached photos, please contact Crime Stoppers at 800.554.5245. Detective Kirby Varnado is leading this investigation for the TPSO.

AMITE, LA - On Nov. 8th, three Tangipahoa Parish residents were arrested on narcotics charges at the parish jail. The incident began around 4:00 p.m., as TPSO Narcotics Agents observed 37 - year old Matthew Cooper of Independence and 48 - year-old Antonio Darnell Sheridan of Hammond displaying erratic behavior while sitting in a vehicle in the parish jail parking lot. Upon making contact, one of the subjects, 48 – year-old Sheridan attempted to flee from agents on foot. While doing so, Sheridan was observed trying to discard several items from his possession. After a brief struggle, Sheridan was detained and the items recovered. Sheridan attempted to throw a glass pipe, commonly used to consume methamphetamine, and a large clear plastic bag containing approximately (7) grams of methamphetamine. Consequently, Sheridan was charged with the introduction of contraband into a penal institute, possession with intent to distribute CDS II, possession of drug paraphernalia, and resisting an officer.

Simultaneously his counterpart, 37- year-old Matthew Cooper was detained at the vehicle and found to be possession of a small piece of paper containing approximately .5 grams of suspected methamphetamine. Cooper was charged with the introduction of contraband to a jail facility and possession of CDS II.

While outside the jail facility attempting to conclude the aforementioned investigation, agents observed 33 – year old Kristina Sharp of Independence walking toward Sheridan’s parked vehicle. Due to Sharp being a known associate of Cooper, she was detained pending further investigations. As a result, Sharp’s purse was located inside of Sheridan's vehicle which contained a glass pipe commonly used to consume marijuana and suspected marijuana. Sharp claimed the purse to her hers and was charged accordingly.

INDEPENDENCE, LA - In the afternoon of Nov.7th, about 2:30 p.m., TPSO Narcotics Agents were traveling northbound on Easley Rd. when they observed 49 – year-old Anthony Murray of Hammond, riding his bicycle on the roadway yelling and waving erratically at passing cars. Agents stopped to conduct a welfare check on the subject only to find him discombobulated and behaving in an abnormal manner. At this time, the subject was detained pending a roadside investigation.

It was soon learned that Murray had several outstanding failure to appear warrants for his arrest, therefore was subsequently detained agents. Murray was asked if he had anything on his possession that would be considered contraband, to which he replied no. A search incidental to arrest revealed a black canvas pouch containing a loaded syringe, several cut straws, and (2) small clear baggies containing a white powder substance suspected to be heroin.

Murray was taken into custody and transported to the parish jail where was charged with possession of CDS I, possession of drug paraphernalia, and (4) failure to appear warrants and medically cleared medical staff.