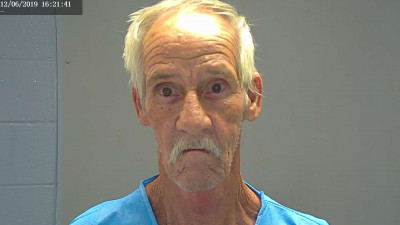 NATALBANY, LA - December 5, 2019 - Tangipahoa Parish Sheriff Daniel Edwards reports that a man who barricaded himself for several hours Thursday evening in a camper in Natalbany surrendered peacefully to deputies. No shots were fired and no injuries reported.

Yesterday, December 5, 2019, around 5:30 p.m., deputies responded to a residence on Hwy 1064 in reference to a disturbance with weapons (shotgun). The accused, 69-year-old Michael Shelton, produced a shotgun during a verbal altercation with his landlord. During the altercation, the landowner was able to disarm the suspect and immediately called the sheriff's office for help. When deputies arrived, Shelton had already barricaded himself in a camper on the landowner's property.

While barricaded inside the camper, Shelton armed himself with another firearm and refused to exit. While deputies secured the immediate and surrounding area, the TPSO's Special Response Team arrived and began attempting to make contact with Shelton. After three hours of negotiations, Shelton surrendered himself peacefully to deputies.

After being evaluated and released from a nearby medical facility, Shelton was taken into custody and charged with aggravated assault with a firearm and resisting an officer. No injuries occurred as a result of this incident. Sheriff Edwards commends his deputies for a job well done. "There is no better outcome to a situation like this," says Edwards. "My deputies did what they were trained to do and they did it well."