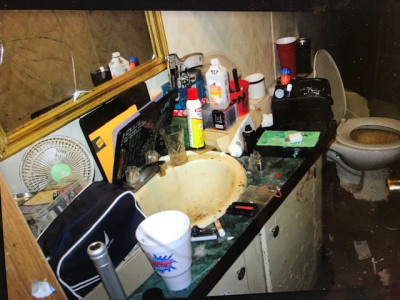 The house became the target of an undercover investigation after repeated complaints of alleged illegal drug activity.

On Dec. 12, 2019, as a result of the initial investigation, a search warrant was obtained and executed for the arrest of (3) wanted subjects who were known to live at the target residence. 62-year-old Curtis Bardwell, 71-year-old Evelyn Bardwell and their son, 25-year-old Curtis Ray Bardwell, all having outstanding warrants through the 21st JDC, were present at the time of the search and arrested without incident.

Four other subjects were located inside of the residence at the time of the search. 25-year-old Krista Brooks, 28-year-old Adam Arroyo, 29-year-old Bryan Wagner, and 41-year-old Steven Holland (who was found hiding in a closet in the master bedroom) were detained and removed from the residence pending investigation.

While agents were inside of the house, which was reported in “deplorable" condition, they observed in plain view numerous forms of drug paraphernalia, multiple small plastic baggies – typically used for illegal drug packaging, glass smoking pipes, and syringes.

A secondary warrant for search of the entire property was subsequently obtained and executed. The secondary search produced seizures of all plain view drug paraphernalia and a quantity of Methamphetamine.

The following individuals were arrested and charged accordingly.

Steven Holland of Ponchatoula, LA : Charge - Fugitive from another Jurisdiction.