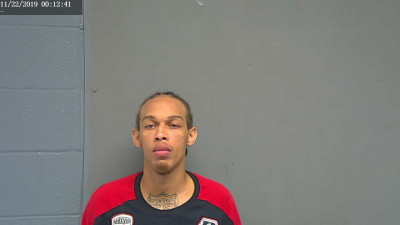 AMITE, LA - December 20, 2019 - The Tangipahoa Parish Sheriff Daniel Edwards reports that an arrest has been made in the homicide investigation involving the shooting death of 27-year-old Hammond resident, Pere Jackson.

Back on November 21, 2019, Gales and 18- year-old Gerrell Perry of Independence, were both taken into custody for being identified and linked to Jackson’s disappearance and subsequent death. Both subjects were charged with accessory to first degree murder and obstruction of justice.

The investigation initially began when Pere Jackson was reported missing since the early morning hours of November 15, 2019. Three days later on November 18th, Jackson's body was located and recovered from a wooded area off of Dead End Road in Natalbany.

At this time, the investigation remains active and on-going. Details surrounding the events of Mr. Jackson’s death will not be released at this time.

Two arrests made in connection with the murder of 27-year-old Pere Jackson, investigation remains on-going.

While details surrounding Mr. Jackson's death will not be released at this time as the case remains under investigation, the Tangipahoa Parish Sheriff's Office does expect to make additional arrests.

Sheriff Edwards is continuing to ask the public for help in gathering information that will lead to all of those responsible for taking the life of Hammond resident, Pere Jackson.

The body of 27-year-old Pere Jackson, who had been missing since Nov. 15th, was located and recovered by investigators yesterday around 4:00 p.m. His body was located near the edge of a wooded area on Dead End St.in Natalbany. Tragically, Jackson’s death is believed to be the result of homicide. An autopsy to confirm the nature and cause of death has already been scheduled. Information on how, or when Jackson died remains under investigation and is not available at this time.

The TPSO is urging anyone with information to call the Tangipahoa Parish Sheriff’s Office at (985) 345-6150. Anonymous tips and/or information can be submitted to Crime Stoppers by calling 800.554.5245, or through our website, tpso.org.

Pere was last seen at his residence on Nov. 15th, around 8:30 a.m. Pere Jackson is tall brown-eyed black male, about 210 pounds, with short dreadlocks. He was last wearing a gray Colman work shirt, sweatpants, and possibly a blue jacket. He has a tattoo dog on his right ankle, the name Odella on his right forearm, and RIP Grandma on his left shoulder.

His family says this is unusual behavior for Pere and they are worried. Pere's vehicle, a silver 2007 Nissan Murano, was recovered on N. Cherry St. approximately (2) hours after he was last seen at his residence, however there have been no confirmed sightings of Pere.

Anyone having information regarding Pere Jackson's whereabouts is asked to call the Tangipahoa Parish Sheriff's Office at (985) 345-6150 or Detective Dale Athmann at (985) 634-9181.