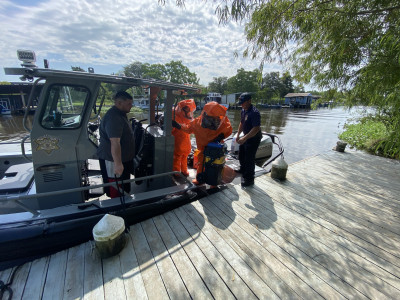 The exercise scenario focused on a biological weapon release occurring at Sun Bun’s, which sickened 22 patrons of the bar. Members of the 62nd dressed out in Level A attire (a self-contained breathing apparatus (SCBA), and a hazardous material, vapor resistant, fully encapsulated suit) and were transported to the training target on the TPSO patrol boat captained by Deputy Bobby Guy. Team members exited the patrol boat, made entry into Sun Bun’s, and began searching for dispersion devices used to distribute the simulated biological agent. Upon discovery, the 62nd team members collected samples, returned to the boat and delivered the samples to the 62nd’s mobile analytical laboratory for on scene identification. The hazard utilized in this attack scenario was Botulinum Toxin, which was readily identified utilizing Electrochemiluminescence technology. Major Joe Bennett, Deputy Commander of the CST, setup the scenario in conjunction with TPSO.

Local Ponchatoula resident, Major Matt Digby, is the Commander of the 62nd Civil Support Team. “The CST has to be prepared at all times to respond to a terrorist attack anywhere in Louisiana. Conducting realistic training with local responders is paramount to the success of the mission when the real call comes in. We thank TPSO and Sun Bun’s for their participation and providing a unique and challenging training venue that allows us to sharpen our skills and be better prepared to respond and protect what matters.”

The 62nd Civil Support Team (Weapons of Mass Destruction) is a federally funded state asset composed of 22 full-time joint Air and Army Louisiana National Guardsmen who, on order, deploys to support civil authorities at domestic chemical, biological, radiological, nuclear, or high yield explosives (CBRNE). The team is tasked with determining the nature and extent of an attack or incident, assessing current and projected consequences, providing expert technical advice on WMD response operations, and helping identify and support the arrival of follow-on state and federal military response assets if needed. There are 57 teams throughout the country who are on call 24/7 to respond in their respective states.