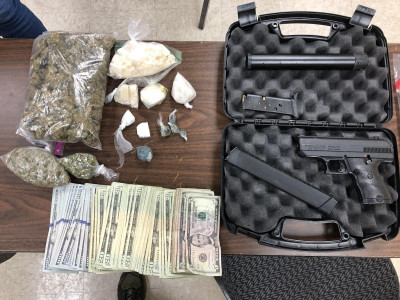 HAMMOND, LA - The Tangipahoa Parish Sheriff’s Office reports that as agents were executing a narcotics related search warrant, they came upon what appeared to be a dog fighting ring and operation on Marie Dr. in Hammond.

As the result, three people now face felony charges that include distribution and the intent to distribute illegal narcotics, possession charges, as well as alleged violations of the dogfighting prohibitions contained in the federal Animal Welfare Act of 1966, a federal law regulating the handling of animals and animal cruelty.

Along with seizing a large quantity of illegal narcotics, drug paraphernalia, a single stack handgun with a silencer suppressor and cash, agents, with the assistance of the Tangipahoa Parish Animal Control, rescued twelve (12) dogs chained or otherwise attached to trees throughout the backyard of the residence.

The search was conducted on January 28, 2021, around 6:30 in the morning. After agents made contact with the owner, secured the residence and its occupants, they began their search. As agents made their way throughout the house and into the back yard, they began to observe tools commonly used to train dogs to fight and scattered medical supplies. Further into the back yard near a canal embankment, was a secured 10 x 10 wooden box with three foot sides, that appeared to be the common area for the dogs to fight. With the discovery of these findings, agents contacted Tangipahoa Parish Animal Control for assistance.

"Illegal gambling and drug sales often take place at dogfighting events. Cases of animal cruelty will always be taken seriously in Tangipahoa Parish,” Chief James Travis said. “When we are made aware of any animal cruelty issues, we do the best we can to investigate and hold those responsible accountable for the suffering they’ve caused these animals." Dogfighting is a felony in all 50 states.