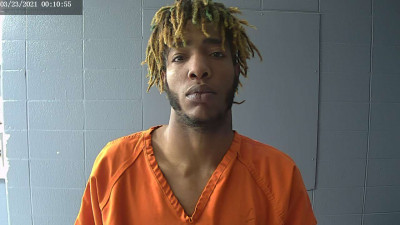 The first incident occurred around 6:50 p.m., when deputies were called to the area of Mike Dr. in Hammond regarding a patrol request involving a black Audi. While patrolling the area, deputies observed the suspect vehicle traveling in their direction southbound on Mike Dr.

Soon after, deputies made contact with the driver who at the time identified himself as Travis Lumpkin. When asked to view his driver’s license, the suspect fled on foot from deputies. A short foot pursuit occured before the suspect, later identified as 35- year-old Mississippi resident Jarvis Dantzler, was detailed and taken into custody.

A search of the subject incident to arrest yielded several small bags of suspected marijuana and a small paper bag containing a glass pipe which Dantzler stated was used for smoking meth.

TPSO Narcotic agents and TPSO K-9 Slash arrived on the scene to perform a free air sweep of Dantzler’s vehicle. The search conducted by TPSO K-9 Slash yielded approximately 10 ounces of marijuana, 4 ounces of methamphetamine, 3 ounces of cocaine, 3 grams of “tar” heroin, and a digital scale.

The second narcotics arrest occurred around 9:45 p.m. that same evening when deputies initiated a traffic stop on a vehicle for several traffic offenses. The incident occurred off of Hwy. 38 on 9th Street in Kentwood.

When deputies made contact with the driver, 20-year-old Kentwood resident Zykeriean Bickham, they immediately smelled the fresh odor of burnt marijuana from inside of the vehicle. Upon asking the driver if he had marijuana in his possession, he removed a clear plastic bag from his cup holder, then quickly placed the bag back in position. Consequently, a green leafy substance fell from the cupholder and landed on the center console.

At this time, Bickham was detained pending a roadside investigation. As a result, two pounds of synthetic marijuana was seized from Bickham’s vehicle.

Bickham was subsequently charged with possession with the intent to distribute CDS I, having the proper equipment required for a motor vehicle, no driver’s license, and for not using turn signals.