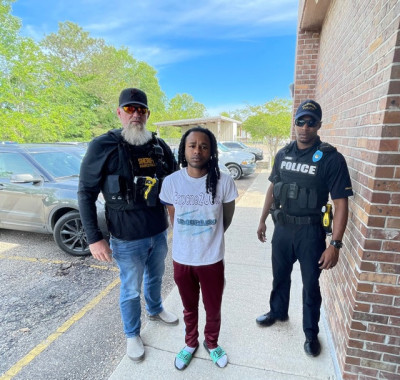 Armed Robbery / Home Invasion. Homeowner fights back, killing one of his attackers to save his family.

Antwon Lewis Seymore, 23, of Ponchatoula, Christopher Austin Jr.(a.k.a. CAPONE), 20, of Hammond, Seionta Dasheawn Bells, 22, of Ponchatoula, and one 16 year-old-male juvenile have been taken into custody. Consequently the fifth suspect, identified as 26 year-old Hammond resident, Devin Mitchell was killed as a result of this incident. All are believed to be members of or associated with the two local street gangs known as “200X” and “La Familia”.

The tragic and deadly incident occurred on April 12, 2021, around 1:00 a.m. at a residence on E. Louisiana Ave. in Hammond. Two homeowners arrived home a short time before 1:00 a.m. As they were approaching their residence, they noticed several subjects walking on down the street. Before they even had a chance to get out of their vehicle, two unknown males opened their car doors, pointed guns in their faces, while pulling them out of the vehicle. The accused subjects began aggressively attacking and beating the couple. Fighting back, the victims were able to break free from the subjects and retreat to inside their residence.

Unbeknownst to the couple, while the attack was taking place outside, several other subjects made entry into their home - which, at that time , was occupied by family members (one adult and two small children). While inside the residence the violence continued. The accused continued to attack, beat, and pistol whip the residents. Multiple shots were also fired inside of the residence.

During the horrific attack, one of the homeowners, fearing for his life and the lives of his family, managed to armed himself with a pair of scissors and began stabbing one of the attackers, 26 year-old Hammond resident Devin Mitchell. Mitchell subsequently succumbed to his injuries.

Three adult victims were transported to the hospital and treated for their injuries. “This is a situation where the homeowner was forced to use deadly force to protect his family and himself from armed intruders that entered his home,” states Chief Travis. The Tangipahoa Parish Sheriff’s Office Criminal Investigations Division did an outstanding job identifying and coordinating the quick apprehension of these dangerous suspects.